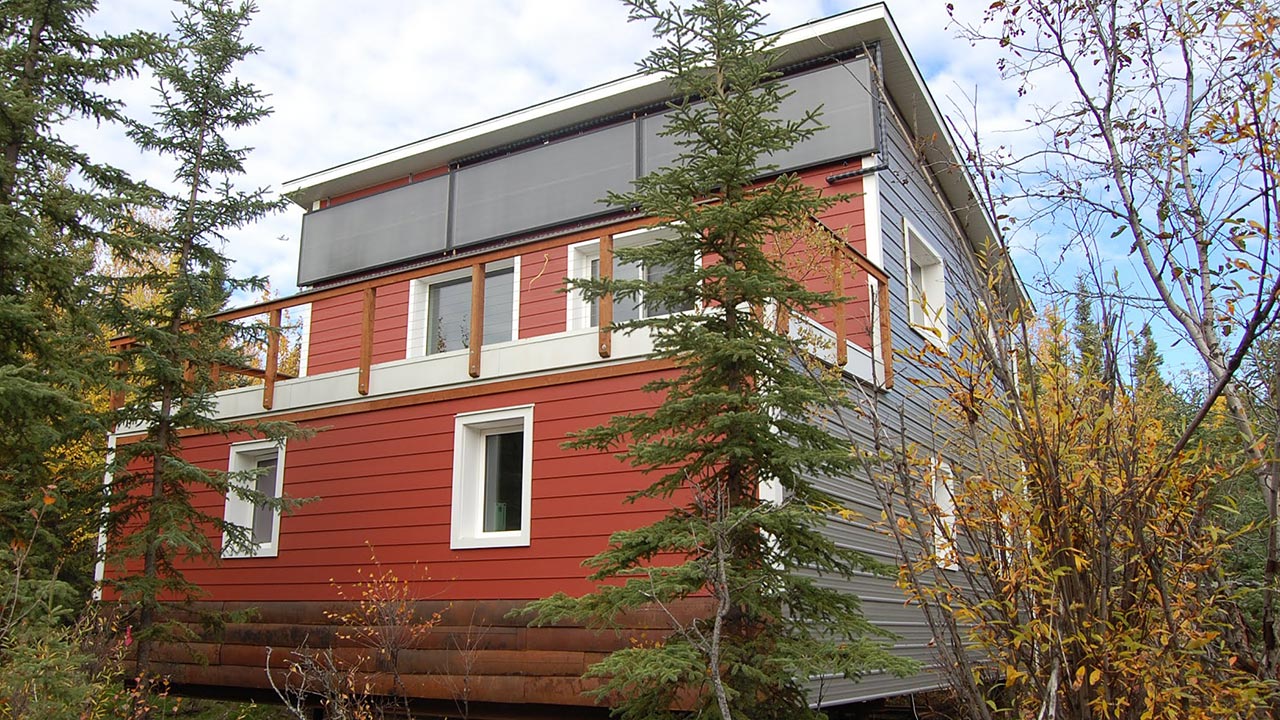 This is your best chance ever to get it right, so know your soils and build accordingly. Good site drainage and foundation waterproofing are crucial here. Ground moisture can be an ongoing problem if it isn’t dealt with initially and is extremely expensive to fix later. This should include a hard look at quality gutters and large overhangs. A perimeter drain may end up being cheap insurance if your soils are wet. If radon is a problem in your area (including but not limited to hills in the Fairbanks area), installing a mitigation system ahead of time is worth the peace of mind and avoided expense down the road. This typically consists of several runs of perforated pipe laid down in specific locations under the slab that meet and stub out of the slab at a common exhaust point.

Ground temperatures will always be colder than those inside the house, so you will experience some degree of heat loss all year long. How much heat you lose depends on the season, your average soil temperature, and the amount of foundation insulation you have in place. Current suggested code minimum is r-15 if you are using rigid foam board. It may be a better idea to use four inches of foam board (r-20) if you are looking long-term, as this is the only time you will be able to do it easily.

As a general rule, a conditioned crawlspace is the best performer. Under this scenario the crawlspace is treated like a miniature basement, whether it is habitable or not, and has both heat and ventilation. With new construction, you have the option to insulate the foundation exterior rather than the interior. This has the advantage of keeping the exposed block (if you aren’t using ICFs) on the inside warmer and therefore less likely to attract condensation. If you are installing a slab, then continuous under-slab insulation is recommended (rigid foam board). How much depends on the climate and whether you are running radiant heat in the slab. A good amount for Fairbanks would be 4” of continuous underslab insulation.

ICF foundations are gaining in popularity. They generally have the highest upfront cost but offer significant labor savings, as most can be assembled in a few days. The foundation insulation is inherent to the foundation, rather than having to be purchased and applied separately. This will also allow you to get started with the rest of the house a little faster.

There is no single wall system that trumps them all–each has unique advantages and disadvantages. Inside the city of Fairbanks, local codes require a 6-mil polyethylene vapor barrier on the inside of the structure to help ensure that water vapor generated indoors during winter cannot work its way into the joints via air leakage. The CCHRC facility uses the REMOTE wall system, which moves the majority of the insulation and the vapor barrier outside the sheathing, keeping the wall cavity warm enough so it doesn’t attract condensation. This is a great way to improve the thermal efficiency of your wall (R-45 compared to R-21 for a conventional 2×6 stud wall), but must follow proper building science guidelines to avoid moisture problems. In Fairbanks, at least two-third of the total R-value should be placed outside the vapor barrier to ensure the wood framing remains warm and dry. A detailed guide can be found at cchrc.org/library.

Other options include a double wall, a furred-in wall, or structural insulated panels, which are discussed in other articles.

If you’re considering structural insulated panels (or SIPs), you need to compare the cost to other designs. SIPs can be excellent performers, however they are vulnerable to moisture problems if not properly detailed. Often, they will contain a structural layer of OSB sheathing on one or both faces, which doesn’t tolerate moisture well. Joints in the panels must be well sealed, and you may still wish to consider ventilating the roof with furring over the panels.

For traditional exterior sidings in wetter climates, it’s wise to include drainage planes and ventilated claddings. An air space behind the siding allows for a drying path, should the building exterior ever become wet, which helps keep maintenance costs down on the sidings. From a performance standpoint, one of the big issues in cold climate walls is conductive heat loss through the studs. No matter which wall design you settle on, try to avoid thermal bridging issues where solid wood framing extends completely through the wall.

If you focus on insulating and air sealing your home, it will likely be very tight. All new homes built in the state of Alaska are required by code to have some means of dedicated mechanical ventilation. Currently, HRV systems represent the most advanced form of residential ventilation. The price of a system is substantial, however it does provide heat recovery along with a wide range of control options, such as programmable run times and recirculation modes which can be used to move air through the house as a means to distribute heat more evenly. This is useful if you have a point source, such as a woodstove, and back bedrooms that would otherwise not receive much heat. If an HRV is not in the budget, you may wish to consider installing the ducting during the framing stage so you can add one later, as retrofitting ducting is not an easy task. State insulation and ventilation requirements can be found on the Alaska Housing Finance Corporation (AHFC) website at ahfc.state.ak.us.

Depending on your budget, you may have to choose between extra space and performance upgrades such as windows and insulation. The better insulated and smaller a home is, the cheaper it is to heat. Properly installed insulation represents a one-time investment that will pay dividends for the life of the home. A high level of thermal performance will also make alternative energy sources (like solar thermal systems or wood heat) go much farther as well.

An uncomplicated design will be simpler and cheaper to build. Dormers, bays, bump-outs, and cantilevers, for example, all present a significant increase in cost and time. You may want to pick one or two unique features that you feel you can’t live without and consider adding others later. This line of reasoning leads to the notion of flexibility in design. If you can design a space to be open, or serve multiple purposes, it will be much easier to adapt that space to meet a different set of needs in the future. Things like bearing walls can become obstacles in this type of scenario if their locations are not chosen with care. Sometimes a beam may cost a little more than a bearing wall, but will be much easier to work around at a later date. Non-load-bearing partitions can be removed and altered relatively easily. If you think you might want a dormer in a specific location but can’t afford it right now, you may be able to frame the structural opening into the roof that will simplify cutting the dormer in later.

Buy it if you can afford it. If you have it, take advantage of it and learn how the sun works in relation to your site. You will want to build and orient your roof lines to maximize solar gain in the swing seasons, yet shade the windows during summer if/when overheating is a possibility. An excellent Alaska-specific resource on solar design produced by the University of Alaska Fairbanks Cooperative Service can be found online here: http://acep.uaf.edu/media/260463/EEM-01255_SolarDesignManual_5thEd201805.pdf

You are effectively parking your car in your house, a convenience that can potentially expose you to harmful byproducts of a combustion engine (such as carbon monoxide and VOCs). If you really want an attached garage, pay particular attention to air sealing the common walls and ceilings that separate the house from the garage to minimize your exposure. During winter when stack effect is greatest, the house tends to operate at a greater negative pressure than the garage and the path of airflow is typically from garage to house. Living spaces over garages will be especially vulnerable.

Other Considerations and Resources

An experienced energy rater can be a good resource. Shop around and find someone you feel comfortable with, who has at least several years of experience and displays a thorough understanding of building concepts. A list of raters can be found on the AHFC website at ahfc.state.ak.us.

A rater will be able to model your house design and provide you with an accurate theoretical assessment of your yearly energy usage. Once your design model has been created, you can add or subtract insulations and other components, gauging the impact on fuel usage and comparing that to your construction cost. Keep in mind that the rating program shows one fixed energy cost at the end of every run. Try multiple runs with various energy costs too, especially if you believe they might rise in the future. An experienced rater may be able find alternative design approaches in the building shell to improve thermal performance and will be familiar with local climate conditions and concerns.

Take lots of pictures. Digital photos and video can be handy if you ever sell the home, or have to find something within the structure at a later date. A walkthrough of the entire home before Sheetrock goes on will provide a record of the mechanical and framing systems for future reference.