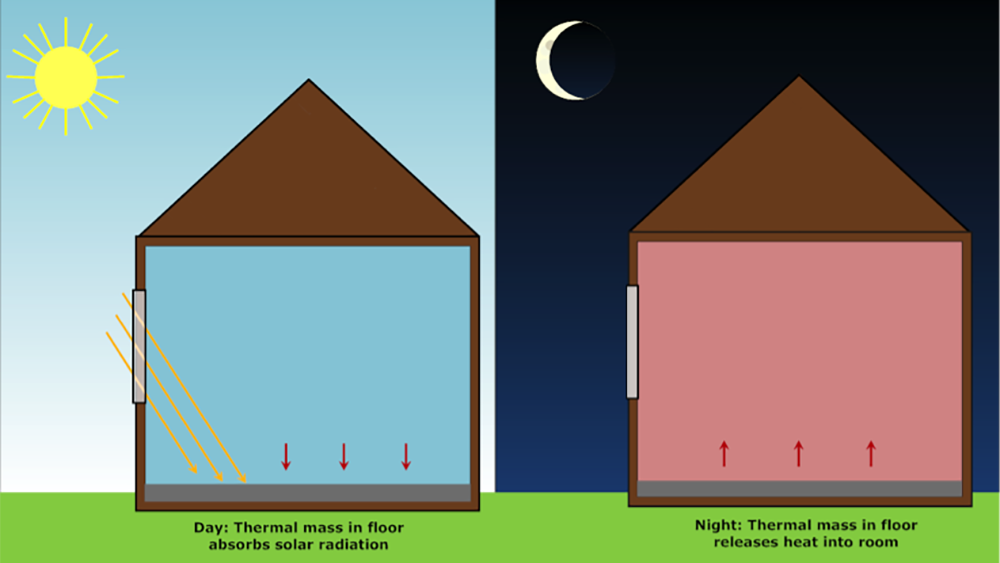 What is the role of thermal mass in passive solar design?

There are ways to take advantage of long hot days and cut your heating bill, even without buying solar panels. Many homes in Alaska use passive solar design to provide heat during parts of the year. Passive solar design combines specific building features with the sun’s energy to help heat a home. Typically, south-facing windows and a large thermal mass are designed to collect, store and distribute solar energy during the heating season. During the summer, things like deciduous trees or awnings can block solar energy from overheating a house.

Thermal mass is key to an effective passive solar design. It means using heavy, dense building components with a high capacity to absorb, store and release heat. Logs, masonry, concrete and adobe, for example, are used in the building envelope to provide structure, but because of their thermal properties they also offer other benefits.

With passive solar, there is no control system that dictates the movement of heat energy, as with a boiler or furnace. To understand how this might work, picture a house on a hill on a sunny spring day. You’re in a south-facing room with a concrete floor. As the sun’s radiation penetrates the windows, it warms up the room. The concrete floor absorbs this energy throughout the day.

At night, the situation reverses. As the room’s ambient temperature drops below the temperature of the floor (the thermal mass), the heat energy stored in the concrete radiates back into the room, stabilizing the temperature and offsetting – or at least delaying – the need for the boiler to turn on. In effect, thermal mass acts as a heat battery, storing solar radiation until the sun disappears and then releasing it back into the room. A properly designed passive solar system can reap energy savings for a home because the thermal mass can store excess heat during the day and allow it to offset nighttime heating loads.

Although thermal mass is often in the form of a concrete floor, there are other ways to incorporate it into a home—such as a wall that receives lots of sun or a masonry bench or shelves in the sun’s path.

As days lengthen during spring and summer, the large south-facing windows in the example above can allow too much solar radiation in. Some people install awnings or curtains, or plant deciduous trees to shade the windows.

Thermal mass also helps prevent overheating, especially in early spring before deciduous trees have leafed out. A room that might have become uncomfortably warm during the day instead experiences overheating as the solar radiation is absorbed by the thermal mass. This energy is released later in the evening when outdoor temperatures are cooler. Overall, the thermal mass acts to smooth out temperature swings in the room, enhancing indoor comfort. It can be an easy way to reduce your heating load without a lot of extra cost.